A quick note: I am in the process of trying to really dial in a handful of recipes. I enjoy giving beers funky names, and I think that’s why I brew so many different recipes instead of trying to fine-tune them. So for the time being, you’ll be seeing beers with unimaginative names like “Pale Ale v1” until I either decide to name it or get the recipe just right and call it finished.

Yo, whoever left the portal to Hell open: shut the damn door! I complained on my previous brew days about the heat, but that was nothing compared to day. 98*F on the thermometer, with a “Real Feel” of 110*F. 110! I guess we got the answer to whether or not they serve beer in Hell (though it’ll be a cold day before any douche named Tucker gets served some of mine).

Anyway, my brain’s melting, what were we talking about again? Oh yeah: Czech Pils. CZ Pils is my favorite kind of pilsner which I know if blasphemy but whatever, I’ll be quaffing delicious CZ Pils with my pineapple pizza and you all can suck a fart. Sorry, heat makes me aggressive.

So my CZ Pils is officially a hit-and-miss recipe, in that I’ve brewed twice and once it was a hit and the second time it was a miss. So we’ll find out if the third time is a charm. 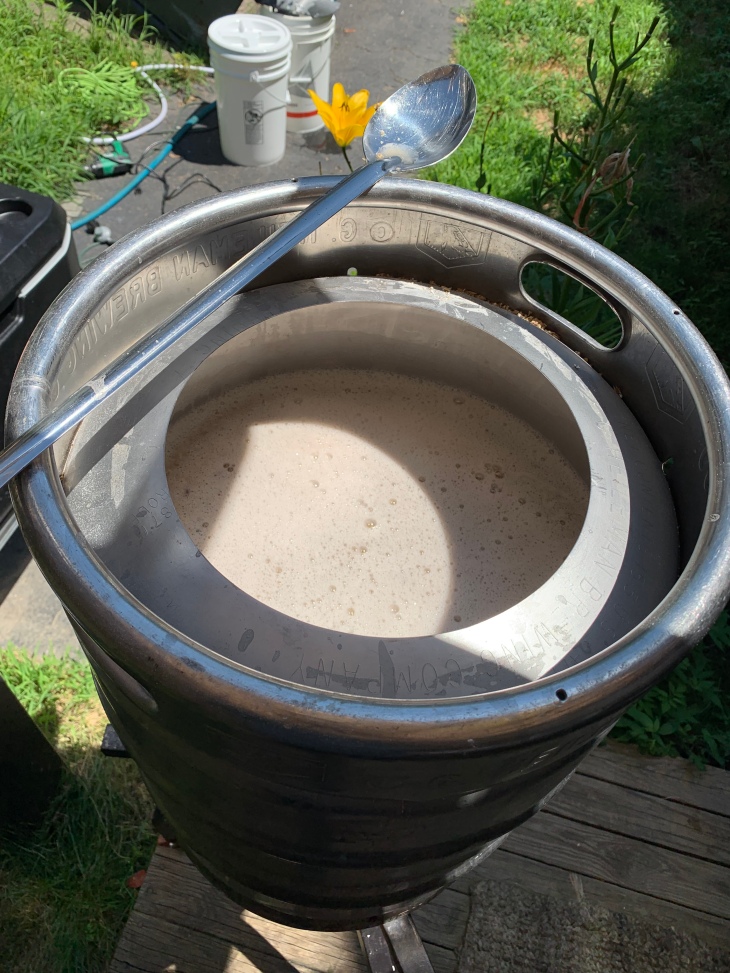 My girlfriend is out of town and the furry head and assistant brewers were reduced to puddles by the heat, so I sort of meandered into this brew day. I did a cursory final cleaning of my equipment and started heating strike water around 11-11:30am. I really wanted to focus on clarity for this pilsner, so I went back to the “malt conditioning” that I mentioned from the saison brew day. I noticed while milling in that my drill was probably operating at too high speed/power; after slowing it down I got a much coarser-looking crush, but that was about 75% of the way through the process. Lesson learned for next time.

Another issue I’ve had is getting volumes right. We came a lot closer today, with 10.75 of the 11 gallons targeted into the fermenter. I don’t think I adequately compensated so the 10 oz of pellets that would be going into this batch. Usually when I’m measuring my strike/sparge water I round up slightly to compensate. Today I rounded up a little more drastically on the strike water, so I wouldn’t have to worry about any water left in the kettle and tubing. Which is good, because it means no second degree burns handling the kettle/tubing. And wouldn’t you know it, I actually hit my volume target on first runnings.

Of course I promptly forgot this lessen when sparging and burned my hands.

I went back to the BrewTan B dosing that I used in the pale ale, to try to precipitate out some of the proteins. I have no idea if this works yet, as the pale ale is still carbing up (and tasting amazing), but after a few brew days I may have a good look and see.

I also spent a LOT of time trying to vorlouf my wort, trying to get it run as clear as possible. This proved to be a largely futile (and painfully hot) process that consisted of me getting progressively crispier under the hot sun and the wort not getting much clearer. I’m starting to think a big part of this is the crush of the grain. After getting a close look at the Hullwrecker in action today, I think I need to have a lighter touch on the drill to avoid pulverizing so many grains. 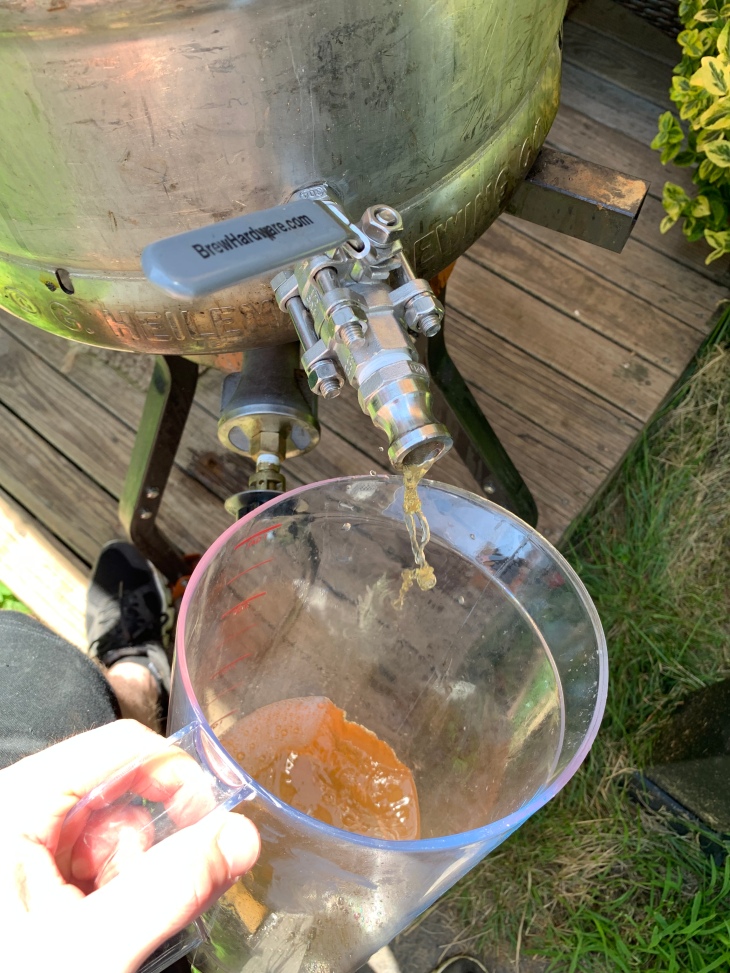 I step mashed again (145*F for 30, 154*F for 30, 168*F for mash out) and had, uh, shockingly high efficiency. My target was 14 gallons pre-boil at 1.030 gravity for a 90 minute boil. So I pulled a sample, temperature corrected, and got a pre-boil gravity of… 1.044. Uh, that’s my finishing gravity. I’m thinking I must have screwed something up along the way and/or the heat melted my brain and it dribbled out my ears, washed away by the rivers of sweat. In my notes, I correct this reading to 1.034 for two reasons. One, going .004 over my target efficiency is in line with the increased efficiency I saw in my past two brewing sessions, and two, I ended up with a post-boil gravity reading of 1.044 and I don’t think the 90 minute boil did nothing.

There were some issue with the boil, which would explain why the gravity it 1.044 and not 1.048 or higher. See, all day I was out in the sun praying for a cloud or a breeze for a bit of relief. Well the breeze came… when I was trying to get 14 gallons to a rolling boil. I’m not a huge fan of my Anvil burners for 11 gallon batches; they just don’t throw enough BTUs. So when the wind came it caused the boil to sputter a bit; not the full rolling boil I like to see.

I used a lot more hops in this batch than I usually do with my Czech Pils recipe. One of the reasons is that I wasn’t getting a firm Saaz aroma in the previous batches. I did sub out the bittering addition for some HopShot in order to drop a little less green stuff into the boil. I also switched it to a First Wort addition. I also revised water chemistry since I lost my old water calculations in the great harddrive crash of 2019, and moved the 0 minute addition to a 20 minute whirlpool to hopefully get more of those noble-hop aromas.

I chilled the wort down to 70*F, which is amazing and a testament to the bad-ass JaDeD chiller. I did not think I would be getting 11 gallons down to anywhere near 70, and we got there in about 15 minutes. Insane. I transferred the wort to the conical, hooked up the glycol and chilled it down to 50*F before pitching 4 packets of dry yeast right onto the top. I put 5psi of CO2 on top and called it a (very long, very hot) day.

Okay, that’s 3 brew days in 17 days. That’s pretty damn good! I’m feeling the muscle memory come back, and after a preliminary tasting of the pale ale (more to come on that), I’m feeling pretty good about my brewing. Because of my notes – and because I force myself to relive the brew day in writing this blog – I’m starting to notice little things I need or want to change that I probably wouldn’t notice if I was just pounding beers the whole time (I had a few, but this was a 7-8 hour session and, as mentioned, it was HOT).

The pale is carbonating and cold-conditioning right now, and the saison is due for kegging any day, so I’ll finally start getting to taste the fruits of these labors and see if all the attention was worth it. I’m cautiously optimistic from the early samples that it is.

Clean as a whistle 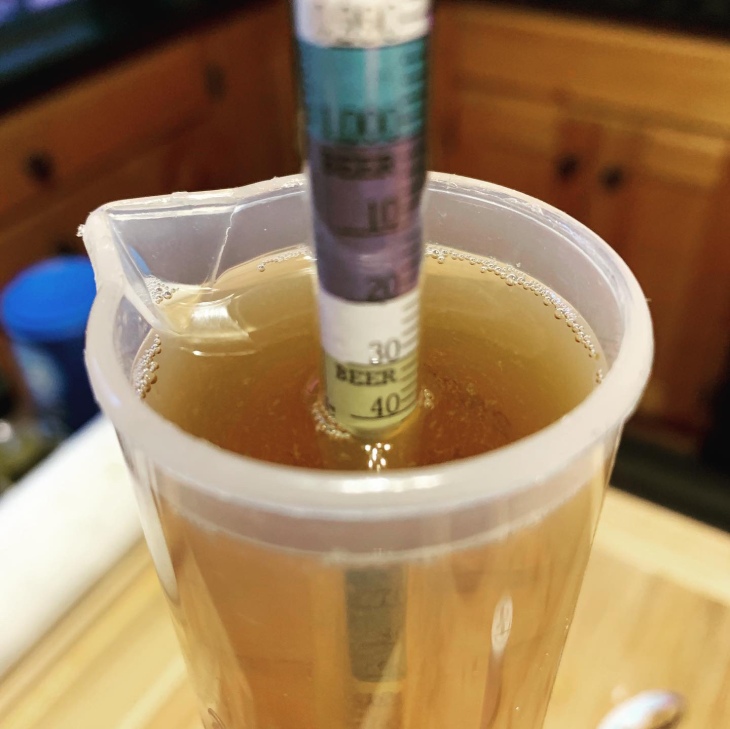