A quick note: I am in the process of trying to really dial in a handful of recipes. I enjoy giving beers funky names, and I think that’s why I brew so many different recipes instead of trying to fine-tune them. So for the time being, you’ll be seeing beers with unimaginative names like “Pale Ale v1” until I either decide to name it or get the recipe just right and call it finished.

Nine days (Absolutely (The Story of a Girl)) since the last brew day, and we’re already back at it. Yes, it’s 86*F and yes, it’s over 90% humidity, and yes, I’m a glutton for punishment… but also for beer.

Today’s batch is a saison. From the BJCP:

Most commonly, a pale, refreshing, highly-attenuated, moderately-bitter, moderate-strength Belgian ale with a very dry finish. Typically highly carbonated, and using non-barley cereal grains and optional spices for complexity, as complements the expressive yeast character that is fruity, spicy, and not overly phenolic.

I brewed a saison a few years ago as part of a split-batch with my first attempt at a pilsner. The pilsner tasted like dogshit but the saison came out really, really good. The grain bill was real simple, bittered with Chinook and late-hopped with Nelson Sauvigon. I was really pleased with the fruity, white wine character the hops gave and how it fixed with the French saison yeast, so I figured I’d give it another shot with some slight modifications.

I have a bad habit of buying hops without a brew day in mind. As such, I have like 3 lbs of Idaho 7 hops.

Not really a great “to style” hop for a saison, but that actually sounds pretty nice to me when mixed with the French saison’s character. When I’ve used French saison yeast, it’s thrown more cracked pepper and spice character with less of the Belgian bubblegum, banana, and clove characteristics that I’m not a big fan of.

I hosted a member of my homebrew club during this brew day, so less fancy pictures to share. 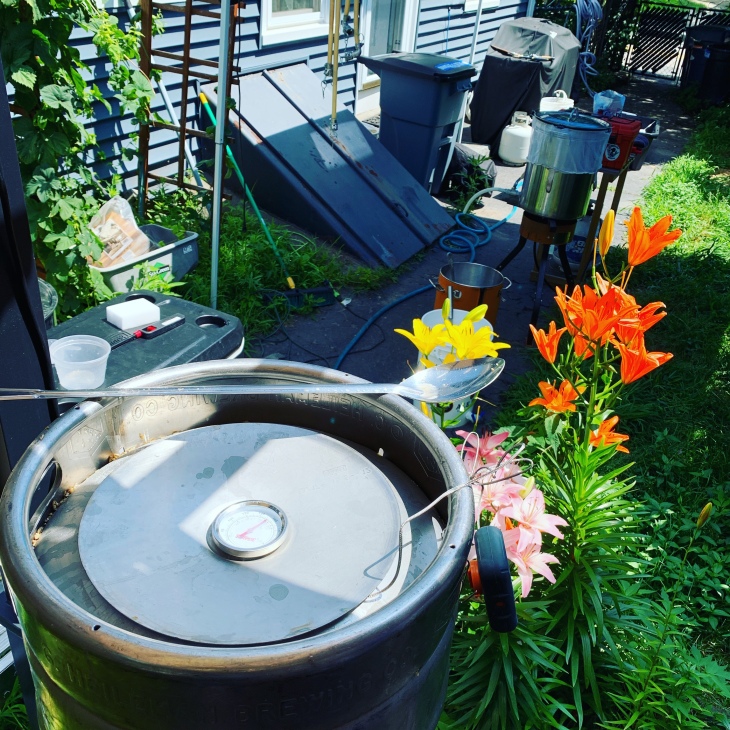 My setup in the foreground, and Bill’s in the background.

I tried something new when milling in for this brew session; first, I bought a new “Hullwrecker” mill as the second-hand mill I had been using started falling apart. Second, I tried something called “malt conditioning.” Basically the idea behind malt conditioning is adding a small amount of water to the malt before milling in order to make the malt husks more pliable. More pliable husks are harder to pulverize, resulting – theoretically – in my more husks making it into the mash, and thereby creating a better filter for the mash.

I saw a roughly 2% increase in efficiency from the Pale Ale brew day, but it’s hard to give malt conditioning all the credit, since it could be attributed to the new grain mill. The new mill was set to the same setting (0.0278) as the previous mill, so I’m willing to entertain the idea that it’s possible the conditioning helped.

As for improving the filtering/clarity of the wort, there were 3 lbs of wheat malt in the recipe so it was an uphill battle with clarity with that, but I’m willing to give it another go and see if I can get more clarity the next time around.

Mash efficiency came in at 77%, way over what I had expected and ended up with a pre-boil gravity of 1.044, a few points higher than the expected 1.040. This is the second brew day in a row where my efficiency was higher than target. I’m thinking that it probably has to do with the two-step mash that I did for these beers; wanting them to finish dry, I mashed both batches in at 145*F and raising the temperature into the 150s after 30 minutes, creating more attenuable worts.

I boiled for 75 minutes, whirlpooling my flameout addition for about 20 minutes. This was a last second decision since there was only one hose available to chill the wort for me and Bill and his boil finished first. I finished with a little less than my target 11 gallons, and at 1.050 gravity (target was 1.048).

All in all it was a pretty stress-free brewday. I only had 3 hop additions and one of those was at “first wort;” none of my new equipment gave me any trouble; and I skipped the BrewTan B addition to the boil because clarity isn’t necessary for a saison (and because I didn’t want to bother trying to rehydrate it / I was enjoying a couple beers). I pitched the yeast starter at 70*F and I’m allowing it to free rise up to 80*F – it’s up to about 78*F after two days. 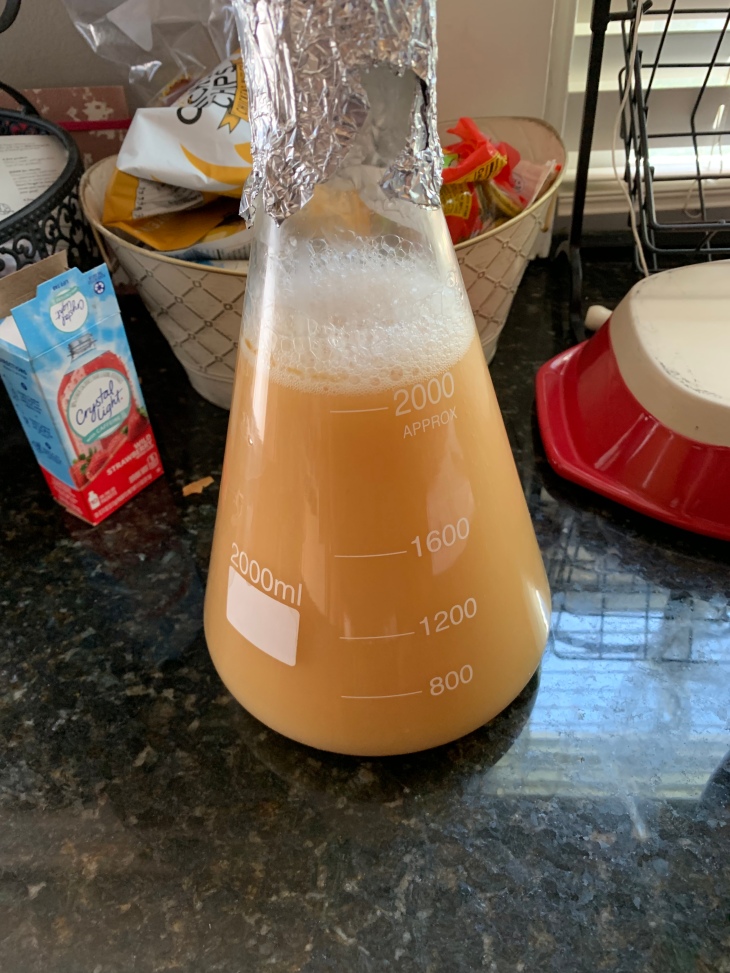 I think the “muscle memory” of brewing is starting to come back to me after being able to brew twice within 10 days. It’s also likely that I’ll be able to brew again this weekend. The pale ale should be finished dry hopping and kegged this week, so that’ll free up a fermenter and with the girlfriend out of town on Sunday I don’t see a good reason not to make it 3 brews in 17 days. I’m thinking a lager of some kind so that I’ll have some time to drink through the pale ale before the next beer is ready. Maybe a Czech Pils or a Vienna Lager?